Lucky Stars BOM and Some Gifting Going On!

Apparently some time has slipped on by again which is partly my doing (I couldn't reveal some projects quite yet) and partly keeping myself pretty darn occupied with projects.  A creative mind never rests. 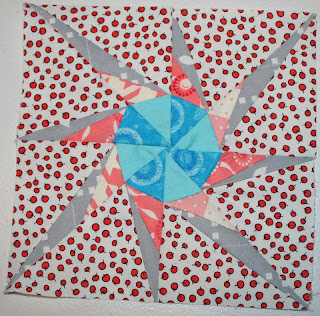 First up, I joined a FANTASTIC BOM courtesy of Elizabeth over @ Don't Call Me Betsy.  Lucky Stars BOM and the above pic is my first block or rather the practice one.  First, I had to really take a stab in the dark though and messed it up.  Really, really dumb mistake and dually noted.  Promise. 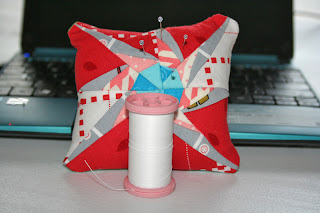 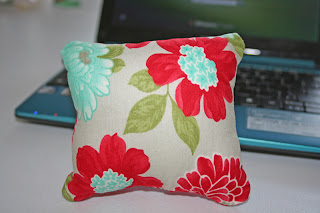 And the back....Vintage Modern approved.  By me.

Once I finished the  Jan. block, I knew I had chosen the right BOM for the year.  Paper piecing and stars are two of my favorite things.  This is my first BOM and I am enjoying the anticipation of seeing the next month's block and the next.....and so on. 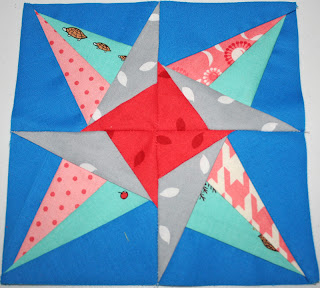 I kind of dove right in with the colors without much thought and I am pretty satisfied with the results.  All of my blocks will be @ 6" finished. 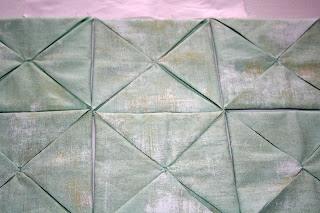 I have been wanting to take on this block for awhile now and what better time than the present and for whom....my MIL as a Christmas gift.  A late one obviously!  I started right before Christmas and it was completed right before the New Year. 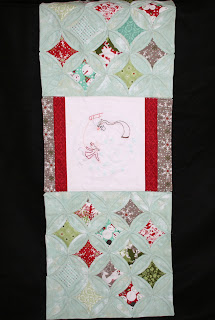 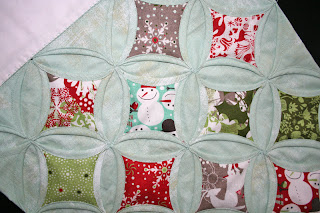 She had told me that she would like blue,green and red.  I spotted this line at my LQS recently and knew it would make for a great cathedral window runner!! 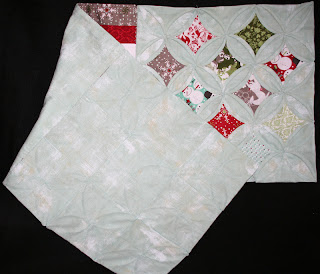 Such a terrific fabric line--right up my alley!  I felt that the Grunge solid would suit it well as the background fabric and I was not disappointed. 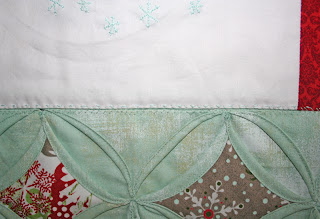 For those that are interested in how I sewed  this all together,  I sewed the center as if it were a separate unit or quilt.  I used a piece of white flannel in the middle and the grunge fabric for the backing.  Then I sewed/attached each cathedral window section with a decorative stitch to each side of the center.  Originally, I had planned on hand sewing them together with a cross stitch, but that only made it difficult to keep everything lined up accordingly. 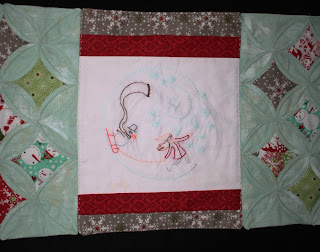 Spotted the little ice skater girl with the snowman on Flickr and I knew I had to stitch it up for this runner!!  I borrowed it from revoluzza.com.  I used perle cotton #6 and #8 along with some German made thread found here.  I love,love some good stitching patterns that stitch up fairly quickly.  Of course a great show on the T.V. does help every now and then to speed things up!

Overall, I am happy with the outcome of this table runner.  It was tedious with all those darn cathedral window blocks being so very finicky.  That's ok though.  Sometimes the process gives you struggles,but in the end it only brings smiles and fulfillment. 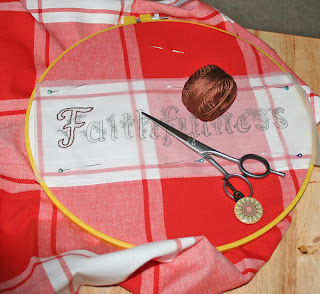 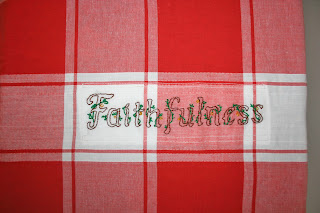 As you can see I knocked out the stitching and it went a lot more swiftly than I had thought at first sight of this pattern.  All those vines and little pears seemed unforgiving.  It was a success mostly.  Mostly?  Well I had a minor set back in the beginning trying to decide how I would transfer the pattern to this toweling fabric.  I went with a piece of tracing paper pinned on the front with the letters spelled out in black and then tore it off when I was done.  I missed a few stitches here and there not lining up well which isn't a big deal just a little irritating.  The end result makes up for the little boo boos!  I placed a piece of white flannel on the back and stitched it by machine all the way around to cover all those obnoxious knots and threads.  Tidied things up a bit more I think.  Lastly, I sewed a hem around all 4 sides twice and pressed it well. 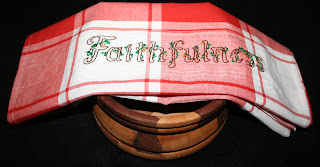 This is for my Aunt in MI whom is celebrating her 35th wedding anniversary on the 21st of this month.  I felt this table runner was perfect for her home.


It is time to skedaddle!  This quilter is exhausted.  I will share more soon!

Those star blocks look so complicated! But so lovely, especially with the fabulous contrasting fabrics. I've always loved that cathedral window block too but never tried it. Great to see your sewing projects.

Wow, I love your star block and especially the cathedral windows! They're so fun, aren't they? Beautiful!

Sara
My husband (my sweetie) Josh and I have been married for 10 adventurous, awesome years! I know my Lord and Savior Jesus Christ!! I have a handsome,smart little boy, Ayden that keeps his mommy alert at all times;) We are expecting Baby #2 February 2014!!!! We are a military family that love to travel and experience different cultures. My other love is quilting without a doubt---I even dream about it:) Take your time and look around my blog and I hope that you become inspired along the way:) God Bless ya'll! 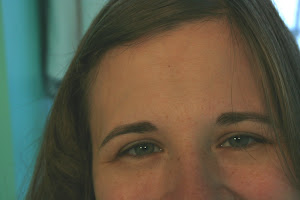 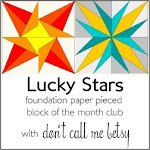 Grab Me (you won't regret it!)